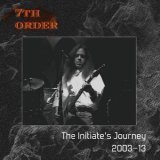 Who is 7th Order?

7th Order is an American progressive rock & roll band, their first recording sessions took place in December 2001. The band has, at various times, been joined by veteran British guitarist Martin Pugh (formally of the 60's British band, Steamhammer, as well as Armageddon with The Yardbirds vocalist Keith Relf, and "The Rod Stewart Album" with Ron Wood & Keith Emerson), drummer Tim Kelliher (of Randy Hansen's Machine Gun), and legendary American rock guitarist Geoff Thorpe (of Vicious Rumors). Reviewers have recognized their particular sound as reminiscent of blues-rock bands like The Rolling Stones & The Yardbirds, with progressive undertones ala Led Zeppelin.

Their worldwide radio debut, a track titled "The Lake of Memory", (also the title of their first CD release) took place in August 2003. After touring & recording in North America through 2006, the band relocated back to their home base in Hawaii.

Their follow up EP, "Road to Yerevan", was released in 2011. After more live work, and with their 10th anniversary coming up - band leader Daniel Jones began compiling a career retrospective "mixed media" CD to be titled "The Initiate's Journey, 2003-13". The disc's release was announced in June 2015 - in addition to including well known 7th Order favorites like "The Lake of Memory", "Road to Yerevan" and "Force Of Nature Comes Down" - the disc also includes video clips, interviews, broadcasts, MP3s, song lyrics, ringtones and more.

Discuss this 7th Order biography with the community: