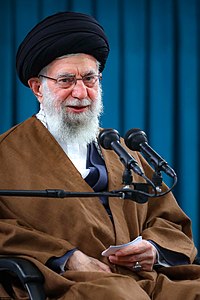 Who is Ali Khamenei?

Ali Hosseini Khamenei is the current Supreme Leader of Iran and a Shia Cleric. He had also served as the President of Iran from 1981 to 1989. In 2012, Forbes selected him 21st in the list of The World's Most Powerful People.

As the head of state, Khamenei is considered the most powerful political authority in Iran. Khamenei was the victim of an attempted assassination in June 1981 that paralyzed his right arm. Iran insists that Khamenei has issued a fatwa saying the production, stockpiling and use of nuclear weapons was forbidden under Islam.

Discuss this Ali Khamenei biography with the community: