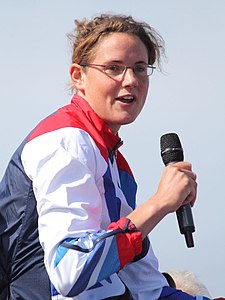 Who is Alison Young?

Alison Young is a British sailor. She competed in the Laser Radial class event at the 2012 Summer Olympics, where she placed fifth.

Alison is one of the world’s leading Radial sailors and is aiming for Gold in Rio 2016. Over the past 18 months, Alison had made rapid progress in this single-handed dinghy class and now regularly finishes in the top five at international regattas. She was first in the 2012 ISAF World Cup and the Sail for Gold Regatta in Weymouth.

Alison is a keen supporter of Parkinson’s Disease UK and often provides prizes for auction at fund-raising events in support of the charity. She has provided weekend sailing lessons which have raised very worthwhile donations. She is now providing training support and encouragement to her elder sister, Kathryn, who is competing in the London Marathon 2013, again to support Parkinson’s.

Alison is lending her support and encouragement to pupils of North Bromsgrove High School, Worcestershire in the national enterprise scheme which is designed to develop youngsters’ business and entrepreneurial skills in their final years at school. So far this year the pupils have reached the national stage of this scheme.

Discuss this Alison Young biography with the community: