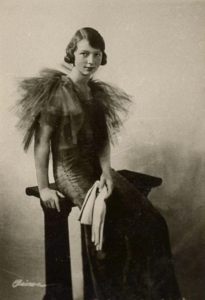 Who was Archduchess Adelheid of Austria?

Archduchess Adelheid of Austria was a member of the Austrian Imperial Family.

Adelheid was born in Schloss Hetzendorf, the second child but eldest daughter of the then Archduke Charles of Austria and his wife Zita of Bourbon-Parma. On 7 January 1914 she was baptised by Friedrich Gustav Piffl, Prince Archbishop of Vienna; her baptismal names were Adelheid Maria Josepha Sixta Antonia Roberta Ottonia Zita Charlotte Luise Immakulata Pia Theresia Beatrix Franziska Isabella Henriette Maximiliana Genoveva Ignatia Marcus d'Aviano. Her godparents were her father's mother Princess Maria Josepha of Saxony and her mother's brother Prince Sixtus of Bourbon-Parma.

On 21 November 1916 Adelheid's great-grand uncle the Emperor Franz Joseph died and her father succeeded him as Emperor of Austria and King of Hungary. During the First World War Adelheid would often accompany her brother Crown Prince Otto and father on trips to inspect the Austrian troops.

Following the Austro-Hungarian Empire's defeat in the war her father was forced to renounce participation in state affairs and subsequently the empire was dismantled and republics were established in Austria and Hungary. In 1919 Adelheid and her family were sent into exile first in Switzerland before later being taken to Portuguese island of Madeira. On 9 March 1922 Adelheid was with her brother Otto and father Emperor Charles when he went into town to buy toys for Carl Ludwig's birthday. On the way back they were enveloped by chill mists and her father caught a cold which later developed in pneumonia from which he died on April 1.

Discuss this Archduchess Adelheid of Austria biography with the community: