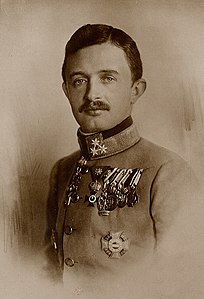 Charles I of Austria

Who was Charles I of Austria?

Charles I of Austria or Charles IV of Hungary was, among other titles, the last ruler of the Austro-Hungarian Empire. He was the last Emperor of Austria, the last King of Hungary, and the last monarch of the House of Habsburg-Lorraine. He reigned from 1916 until 1918, when he "renounced participation" in state affairs, but did not abdicate. He spent the remaining years of his life attempting to restore the monarchy until his death in 1922. Following his beatification by the Catholic Church, he has become commonly known as Blessed Charles of Austria.

Discuss this Charles I of Austria biography with the community: