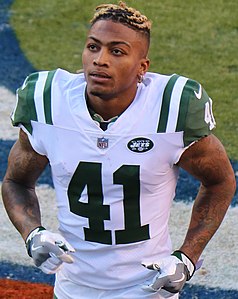 Who is Buster Skrine?

Darryl "Buster" Skrine is an American football defensive back for the Cleveland Browns. He played college football for the University of Tennessee at Chattanooga, where he was twice named to the First Team All-Southern Conference. He was selected with the 137th pick in the fifth round of the 2011 NFL Draft by the Cleveland Browns. Skrine developed the nickname, "Buster," from grandmother, because his father shares the same first name.

Discuss this Buster Skrine biography with the community: