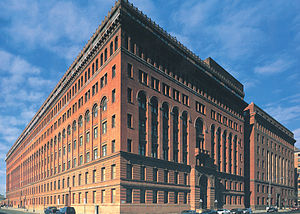 Who was James G. Hill?

James G. Hill was an American architect who, during the period 1876 to 1883, headed the Office of the Supervising Architect of the United States Department of the Treasury, which oversaw major Federal buildings.

During that period he designed or supervised design of many courthouses, post offices and other public buildings.

Works associated with Hill include:

Discuss this James G. Hill biography with the community: