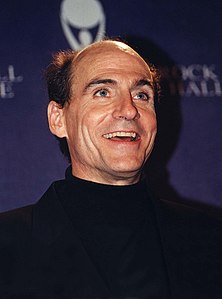 Who is James Taylor?

James Vernon Taylor is an American singer-songwriter and guitarist. A five-time Grammy Award winner, Taylor was inducted into the Rock & Roll Hall of Fame in 2000.

Taylor achieved his breakthrough in 1970 with the No. 3 single "Fire and Rain" and had his first No. 1 hit the following year with "You've Got a Friend", a recording of Carole King's classic song. His 1976 Greatest Hits album was certified Diamond and has sold 12 million US copies. Following his 1977 album, JT, he has retained a large audience over the decades. His commercial achievements declined slightly until a resurgence during the late 1990s and 2000s, when he recorded some of his best-selling and most-awarded work.

Discuss this James Taylor biography with the community: