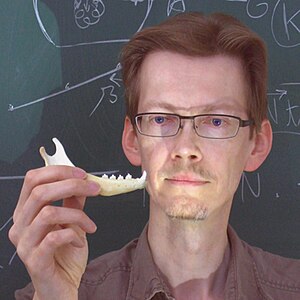 Jukka Jernvall is a Finnish evolutionary biologist in the field of evo-devo research. His research has centered on the interplay of ecology, evolution and developmental biology, especially of the mammalian dentition. Jernvall is currently Academy professor at the Institute of Biotechnology, University of Helsinki. He is also a research professor at Stony Brook University, NY, USA.

Jernvall received his Ph.D. in evolutionary biology in 1995. His thesis investigating the evolution and development of mammalian molar cusp patterns was supervised by Irma Thesleff and Mikael Fortelius. This led to the description of enamel knot as molecular signaling centers in teeth. He also discovered and coined the term ‘secondary enamel knot’, previously overlooked signaling centers regulating tooth cusp development. This discovery helped to mechanistically link molecular regulation of growth and differentiation to shape. Later, Jernvall has focused on the modelling of three-dimensional dentition phenotypes. He has studied why certain dentition patterns arise several times during the course of evolution, while other patterns occur only rarely.

Discuss this Jukka Jernvall biography with the community: