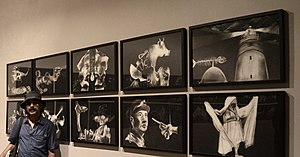 Who is K. M. Madhusudhanan?

K.M. Madhusudhanan is an Indian film maker and artist. Born in Allapuzha, a coastal district in Kerala, India. Started drawing at a very young age. After his preliminary education, studied painting in Fine Arts College, Thiruvananthapuram, Kerala. Later, studied print making at the Faculty of Fine Arts, M.S. University, Vadodara, Gujarat. Has exhibited his paintings and drawings in India and abroad. Has focused on cinema for the past 20 years and has directed several documentaries and short fiction films. Bioscope was his first feature film.

Madhusudhanan is deeply concerned with cinema, its history, and the significant political, cultural and sociological roles it has played in India. His films revolve around this theme as a leit motif, as does his art.

Self Portrait, scripted and directed by Madhusudhanan introduced a new narrative style. Tells the story of a street photographer through news of global wars. The protagonist sees his own image in the pictures of the dead he is called to take for police records. The film was shown at over a dozen international film festivals and received the best film award from Greece. Was selected by the Museum of Modern Art, New York as part of a selection of Outstanding Short Films from International Festivals.

Discuss this K. M. Madhusudhanan biography with the community: