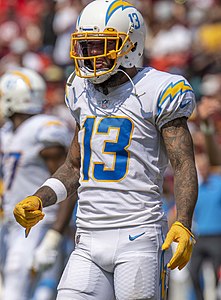 Who is Keenan Allen?

Keenan Alexander Allen is an American football wide receiver for the San Diego Chargers of the National Football League. He played college football for the University of California, Berkeley and declared for the NFL Draft after his junior year. He was drafted by the Chargers in the third round of the 2013 NFL Draft.

Discuss this Keenan Allen biography with the community: