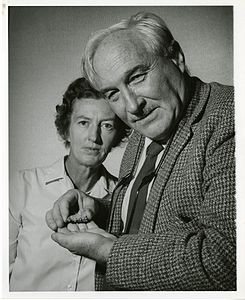 Who was Louis Leakey?

Louis Seymour Bazett Leakey was a British paleoanthropologist and archaeologist whose work was important in establishing human evolutionary development in Africa, particularly through his discoveries in the Olduvai Gorge. He also played a major role in creating organizations for future research in Africa and for protecting wildlife there. Having been a prime mover in establishing a tradition of palaeoanthropological inquiry, he was able to motivate the next generation to continue it, notably within his own family, many of whom also became prominent. Leakey participated in national events of British East Africa and Kenya during the 1950s.

In natural philosophy, he asserted Charles Darwin's theory of evolution unswervingly and set about to test Darwin's hypothesis that humans arose in Africa. Leakey was also a devout Christian.

Discuss this Louis Leakey biography with the community: