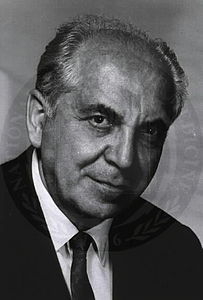 Who was Ludwik Gross?

Ludwik Gross was a Polish-American virologist who discovered two different tumor viruses, murine leukemia virus and mouse polyomavirus, capable of causing cancers in laboratory mice. Gross was born in Cracow, Poland to a prominent Jewish family and studied for a degree in medicine at the Jagiellonian University. He escaped Poland in 1940 after the 1939 Nazi invasion and travelled to the United States, ultimately serving in the US armed forces during World War II.

After the war, he joined other scientists in the "Golden Age" of research at the Bronx VA Hospital, becoming director of the Cancer Research Division. One story claims that this appointment allowed him to move his research mice from the trunk of his car, where he had been carrying out studies, into a fully equipped laboratory.

Gross was a major proponent of the possibility that some cancers can be caused by viruses and began a long search for viral causes of murine leukemia. In the course of these studies, he isolated the Gross murine leukemia virus strain as well as the first polyomavirus--so named for its proclivity to cause cancers in multiple tissue types.

Discuss this Ludwik Gross biography with the community: