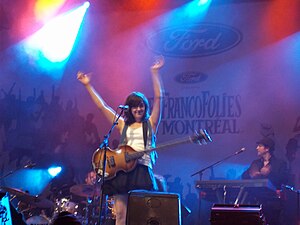 Who is Marie-Pierre Arthur?

Marie-Pierre Arthur is the stage name of Marie-Pierre Fournier, a Canadian pop singer-songwriter from Quebec. Originally from Grande-Vallée, she is currently based in Montreal.

Formerly a backing musician and vocalist for artists such as Karkwa, Galaxie, Ariane Moffatt, Stefie Shock, Nanette Workman and Édith Butler, she released her self-titled debut album as a solo artist in 2009. Her followup, Aux alentours, was released in 2012 and was named as a longlisted nominee for the 2012 Polaris Music Prize on June 14, 2012. She also appeared as a guest vocalist on Buck 65's 20 Odd Years.

She won the Félix Leclerc Prize for best new singer-songwriter at the 2012 FrancoFolies, and was nominated for several Prix Félix at the 2009 and 2010 ADISQ awards.

In 2013, she won an Independent Music Award for her album Aux alentours in the Pop Album category.

Discuss this Marie-Pierre Arthur biography with the community: