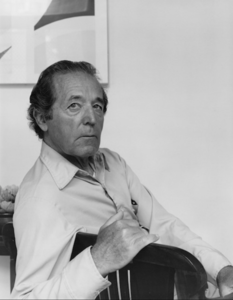 Who was Nassos Daphnis?

Nassos Daphnis was a Greek born American abstract painter and tree peony breeder. Originally a florist he brought the sensitivity he cultivated in that profession as well as a profound sense of natural geometry to his new discipline, painting.

As a painter Daphnis was considered to have worked in the Hard-edge and Geometric abstraction style looking back towards the opus of Piet Mondrian. He was categorized as an abstract imagist a term which arose from a 1961 exhibition in the Solomon R. Guggenheim Museum, New York called American Abstract Expressionists. For many years his artwork was represented by the Leo Castelli Gallery and in then in his later years by the Anita Shapolsky Gallery.

In 1938 he met William H. Gratwick of Linwood Gardens, New York, a prominent breeder of tree peonies. Daphnis eventually became a partner with Gratwick in the business and art of hybridizing tree peonies, creating many beautiful cultivars and naming them after artists and figures in Greek mythology.

Discuss this Nassos Daphnis biography with the community: