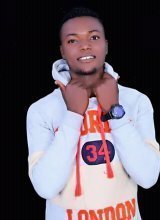 He was also known as oneman squad(zingfa) a name given by his late grandma "RIMI KURDAM".

And his secondary school at Bright Future Community Secondary school (BFCSS) Zambang langtang South Local Government in the year 2009-2014. In his trials and hard work on the pursuit, he was recognized as the best student of 2011-2013 in the school session.

Meanwhile before graduation he won a two year scholarship to complete his O'level.

After his secondary School he furthermore to learn welding engineering after O level certificate obtained. He started the work on the 14th of june 2014 in langtang north LGA.

Initially, Thundason was popularly known as a footballer. He played different competitions from different local governments, on contracts and for his hometown.

Fortunately during his work as a welder in langtang North, he discovered his talent as singing to God.

He made a friend whose name is NALFA OBED LARSON aka "Niliflash". Together with Nili they learn some things more about music. He's such a kind helping friend who encourages him to stand strong cause he [many peoplehave seen something good in him of which it was still hidden.

Ever since meeting Nili, Thundason decided to joint a musical crew ''Tarok Mafia Record '' aka "TMR" and that was the beginning of challenges rejected by people that he is someone who doesn't speak clearly.

Not minding and allowing that to wirths him down. He keep striving hard and today his songs are getting top in his locality. Sometimes he write songs for people free.

Today he is the Mega Hit Rangers (MHR) Entertainment CEOs.

Discuss this Thundason biography with the community: