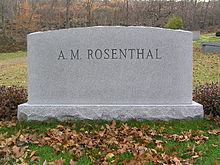 Who was A. M. Rosenthal?

Abraham Michael "A.M." Rosenthal, born in Sault Ste. Marie, Ontario, Canada, was a New York Times executive editor and columnist and New York Daily News columnist. He joined the New York Times in 1943 and worked for the Times for 56 years - from 1943 to 1999. Rosenthal won a Pulitzer Prize in 1960 for international reporting. As an editor at the newspaper, Rosenthal oversaw the coverage of a number of major news stories including the Vietnam war, the Pentagon Papers, and the Watergate scandal. Together with Catherine A. Fitzpatrick, he was the first westerner to visit a Soviet GULAG camp in 1988.

Discuss this A. M. Rosenthal biography with the community: