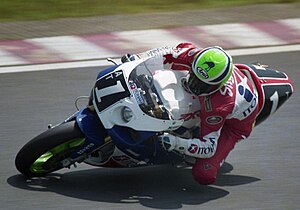 Who is Aaron Slight?

He was Australian Superbike Champion in 1991, before spending most of the 1990s racing in the Superbike World Championship, amassing 87 podiums, 13 wins and 8 pole. He is also the only rider to win the Suzuka 8 Hours race in three successive years, having done so in 1993–1995.

He won his first WSB race in 1992 on a Kawasaki for Team Moving Kawasaki. On a factory Castrol Honda he was third overall in 1994 and 1995, taking his first Honda win at Albacete. The only real low note was Laguna Seca in 1995, where a poorly handling Honda and many local wildcards left him 18th on the grid. He was runner-up to Troy Corser in 1996, and third again in 1997 as team-mate John Kocinski won the title.

In 1998 he was second to Carl Fogarty by 5.5 points, only missing the title due to mishaps such as a last-lap engine failure at Monza, a last-lap incident with back-marker Jean-Marc Deletang at Philip Island, and missing race 2 at Laguna Seca due to a startline pileup on the aborted attempt to restart the first race. He did however take his first career double victory, at Misano.

Discuss this Aaron Slight biography with the community: