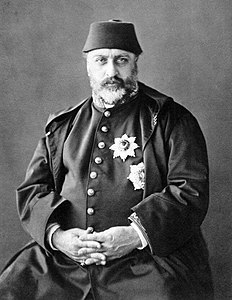 Abdülaziz was the 32nd Sultan of the Ottoman Empire and reigned between 25 June 1861 and 30 May 1876. He was the son of Sultan Mahmud II and succeeded his brother Abdülmecid I in 1861.

Born at the Eyüp Palace, Constantinople, on 9/18 February 1830, Abdülaziz received an Ottoman education but was nevertheless an ardent admirer of the material progress that was made in the West.The Sultan took an interest in documenting the Sultanate. He was also interested in literature and was also a classical music composer. Some of his compositions have been collected in the album "European Music at the Ottoman Court" by the London Academy of Ottoman Court Music.

Discuss this Abdülaziz biography with the community: