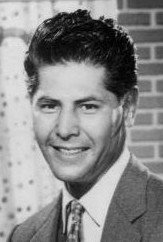 Who is Abel Fernandez?

Abel Gonzalez Fernandez is a Yaqui/Mexican actor who played in movies from 1953 to 2002. He is best known for his role as Federal Agent William "Bill" Youngfellow on the 1959-1963 ABC Television series The Untouchables. He was the only cast member from the original Untouchables lineup in the series' 1959 "Scarface Mob" pilot, other than Robert Stack himself, to be cast for the series. His character is based on that of William Jennings Gardner, Native American member of the real-life Untouchables Federal squad.

Discuss this Abel Fernandez biography with the community: