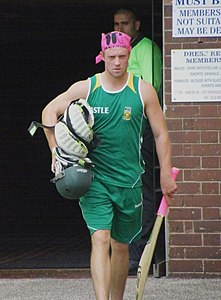 Who is AB de Villiers?

Abraham Benjamin de Villiers is a South African cricketer, who captains the South African One Day International team, having succeeded Graeme Smith after the 2011 Cricket World Cup. He is also part of Royal Challengers Bangalore in the Indian Premier League. He is ranked 3rd in the Test batting rankings and 1st in the ODI batting rankings.

The son of Dr Abraham P de Villiers, he attended Afrikaanse Hoër Seunskool, a public school located in Pretoria. De Villiers is a right-handed batsman, who, in a very short space of time, has accumulated many runs in Tests including 16 centuries and 32 fifties. He still holds the record for most Test innings without registering a duck, before being dismissed for nought against Bangladesh in November 2008. He also holds the second-highest individual score by a South African batsman in an innings, with 278*. Until 2012, he was an occasional wicket-keeper for South Africa, although since the retirement of regular Test keeper Mark Boucher and under his own ODI captaincy he has started to regularly keep wicket for the national side in Tests, ODIs and T20s. He is also commonly regarded as one of the best fielders currently in international cricket and is considered to be the best South African fielder since Jonty Rhodes.

Discuss this AB de Villiers biography with the community: