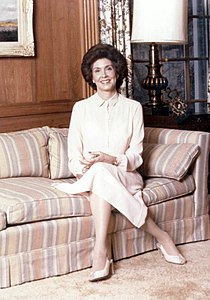 Who is Adele Khoury Graham?

Adele Graham was the First Lady of the state of Florida from 1979 to 1987. She spent her career as public school teacher in Massachusetts and Miami, Florida. In all, the Grahams have four children and 11 grandchildren.

Adele Khoury Graham was born and raised in Miami, Florida. Her parents both moved to Florida in the 1920s. Her mother came from Ohio. Her father was born in Beirut, Lebanon and spent his younger years, after immigrating, in Georgia.

While at the University of Florida, she became engaged to Bob Graham. They married during her junior year and Bob's senior year. Then they moved to Boston, where Bob attended Harvard Law School and Adele graduated from Boston University. She taught English and history in the public schools in Wellesley, Massachusetts until Bob graduated from law school. In 1962, during her second year of teaching, she was selected as Massachusetts Teacher of the Year.

Returning to Miami, Adele became involved in civic affairs. She served as a board member with Beaux Arts at the Lowe Art Museum, the Board of Public Television, and Channel 2. She also organized a county-wide school volunteer resource guide for the Junior League, among other activities.

Discuss this Adele Khoury Graham biography with the community: