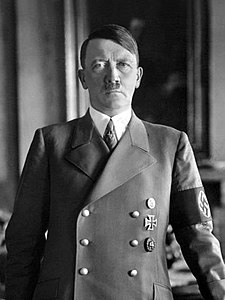 Who was Adolf Hitler?

Hitler was a decorated veteran of World War I. He joined the German Workers' Party in 1919, and became leader of the NSDAP in 1921. In 1923, he attempted a coup d'état in Munich, known as the Beer Hall Putsch. The failed coup resulted in Hitler's imprisonment, during which time he wrote his memoir, Mein Kampf. After his release in 1924, Hitler gained popular support by attacking the Treaty of Versailles and promoting Pan-Germanism, antisemitism, and anti-communism with charismatic oratory and Nazi propaganda. After his appointment as chancellor in 1933, he transformed the Weimar Republic into the Third Reich, a single-party dictatorship based on the totalitarian and autocratic ideology of Nazism.

Hitler's aim was to establish a New Order of absolute Nazi German hegemony in continental Europe. To this end, his foreign and domestic policies had the aim of seizing Lebensraum for the Germanic people. He directed the rearmament of Germany and the invasion of Poland by the Wehrmacht in September 1939, resulting in the outbreak of World War II in Europe. Under Hitler's rule, in 1941 German forces and their European allies occupied most of Europe and North Africa. In 1943, Germany was forced onto the defensive and suffered a series of escalating defeats. In the final days of the war, during the Battle of Berlin in 1945, Hitler married his long-time partner, Eva Braun. On 30 April 1945, less than two days later, the two committed suicide to avoid capture by the Red Army, and their corpses were burned.

Discuss this Adolf Hitler biography with the community: