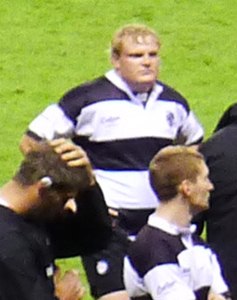 Who is Adriaan Strauss?

Jan Adriaan Strauss, is a rugby hooker who represents Free State Cheetahs in the ABSA Currie Cup and the Cheetahs in Super Rugby He made his international debut for South Africa on 19 July 2008 coming off the bench against Australia in the Tri Nations. He stayed with the team for the remainder of the Tri Nations earning 5 caps, but missed out on the November tour to the UK following the return of John Smit to action with Chiliboy Ralepelle leapfrogging him in the selection order.

He scored both of his first two tries for the Springboks in one test on 18 November 2012 against Scotland at Murrayfield in Edinburgh.

Discuss this Adriaan Strauss biography with the community: