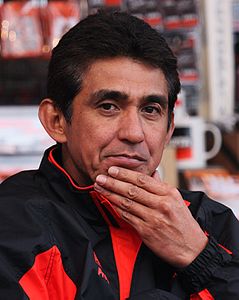 Who is Aguri Suzuki?

Aguri Suzuki is a former racing driver from Japan. He participated in 88 Formula One Grands Prix, and his most notable achievement in racing was 3rd place at the 1990 Japanese Grand Prix. Suzuki then became involved in team ownership, with interests firstly in the Japanese Formula Nippon Championship and the IRL in partnership with Mexican racer Adrian Fernandez. Most notably however, he was the owner of the Super Aguri F1 team, which participated in Formula One from 2006 to 2008.

Discuss this Aguri Suzuki biography with the community: