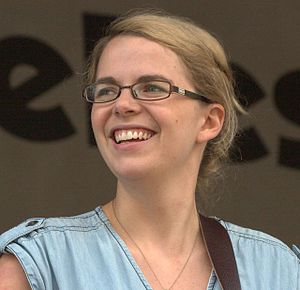 Who is Aoife O'Donovan?

Aoife O’Donovan in Newton, Massachusetts, is an American singer and songwriter. She is also the lead singer for the progressive bluegrass/string band, Crooked Still, and a member of the female folk-noir trio, Sometymes Why. Her first professional engagement was singing lead for the folk group The Wayfaring Strangers. She has performed and recorded with Ollabelle, Karan Casey and Seamus Egan, Jerry Douglas, Jim Lauderdale, Darol Anger, Sarah Jarosz, Sara Watkins, Christina Courtin, Chris Thile, Noam Pikelny, Edgar Meyer, Stuart Duncan and Yo-Yo Ma. O’Donovan has also performed with the Boston Pops Orchestra and the Utah Symphony Orchestra. In 2012, she sang on most of the tracks on the album "Be Still" by the jazz group the Dave Douglas Quintet. During the summer of 2013, she toured with Garrison Keillor and his "A Prairie Home Companion Radio Romance Tour."

Discuss this Aoife O'Donovan biography with the community: