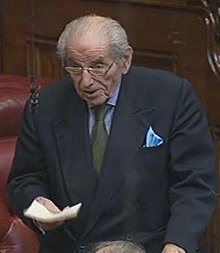 Who was Alan Campbell, Baron Campbell of Alloway?

Alan Robertson Campbell, Baron Campbell of Alloway ERD QC was a British judge, barrister and author who sat in the House of Lords as a life peer.

The son of John Kenneth Campbell and Juliet Pinner, he was educated at Aldenham School, Hertfordshire and Ecole des Sciences Politiques in Paris in 1934. He was further educated at Trinity Hall, Cambridge, where he graduated with Bachelor of Arts in economics and law in 1938, and with a Master of Arts. From 1939 to 1940, Campbell served in the Royal Artillery Supplementary Reserve, British Expeditionary Force, reaching the rank of Second Lieutenant, and was a Prisoner of War in Colditz Castle from 1940 to 1945. He received the Emergency Reserve Decoration in 1996.

Called to the Bar by the Inner Temple in 1939, he was made a Queen's Counsel in 1965 and a Bencher in 1972. In 1975 Campbell became a member of the Management Committee of the United Kingdom Association for European Law, and in 1976 he was appointed Recorder of the Crown Court, holding both posts until 1989. From 1974 to 1979 he was a member of the Law Advisory Panel of British Council, from 1988 to 1991 he was Vice-President of the Association des Juristes Franco-Britanniques and from 1978 to 2004 President of the Colditz Association. On 2 June 1981, he was created a life peer with the title Baron Campbell of Alloway, of Ayr in the District of Kyle and Carrick. He sat as a Conservative and was a member of the Scottish Peers' Association.

Discuss this Alan Campbell, Baron Campbell of Alloway biography with the community: