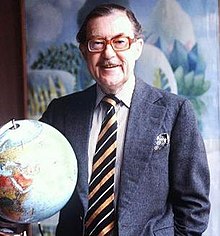 Who was Alan Whicker?

Alan Donald Whicker CBE was a British journalist and television presenter and broadcaster. His career spanned almost 60 years, during which time he presented the documentary television programme Whicker's World for over 30 years. He was made a Commander of the Order of the British Empire in 2005 for services to broadcasting.

Discuss this Alan Whicker biography with the community: