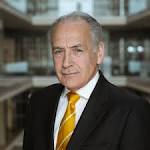 Who is Alastair Stewart?

Alastair James Stewart OBE is an English journalist and newscaster, currently employed by ITN where he is a main newscaster for ITV News.

Stewart joined Southern Television in 1976 then joined ITN in 1980 where he served 3 years with Channel 4 News and remains a main newsreader with ITV News after 31 years, making him the longest serving male newsreader on British television having worked in both the local news, and the national news for the past 38 years.

He is a patron of the charity Kids for Kids - helping children in Darfur and disability charity Scope.

Discuss this Alastair Stewart biography with the community: