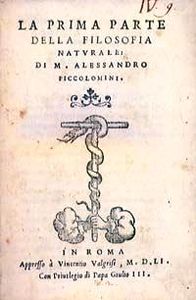 Who was Alessandro Piccolomini?

Alessandro Piccolomini was an Italian humanist and philosopher from Siena, who promoted the popularization in the vernacular of Latin and Greek scientific and philosophical treatises. His early works include Il Dialogo della bella creanza delle donne, o Raffaella and the comedies Amor costante, and Alessandro, which were sponsored and produced by the Sienese Accademia degl'Intronati, of which he was a member and an official. Much of his literary production consisted of translations from the Classics, of which Book xiii of Ovid's Metamorphoses and book vi of the Aeneid are early examples. In 1540, while a student at the University of Padua, he helped found the Infiammati Academy, in which he gave lectures in philosophy. His poetry, in which he followed the Petrarchan tradition, appeared first in various contemporary collections, and in 1549 he published as a single volume one hundred sonnets titled Cento sonetti. Later in life, he translated Aristotle's Poetics on which he wrote a learned commentary issued in 1575. His interest in Aristotle included the publication of a paraphrase of Aristotle's Rhetoric with commentary. In his Trattato della grandezza della terra e dell' acqua, he opposed the Aristotelean and Ptolemaic opinion that water was more extensive than land.

Discuss this Alessandro Piccolomini biography with the community: