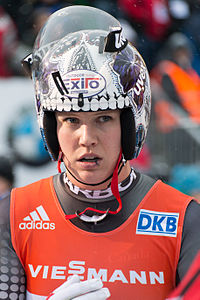 Who is Alex Gough?

Alex Gough is a Canadian luger who has competed since 2002. She won a bronze medal in the women's singles event at the FIL World Luge Championships 2011 in Cesana, the first ever for a Canadian woman and only the second overall.

Gough also competed in two Winter Olympics, earning her best finish of 18th in the women's singles event at Vancouver in 2010. She was seen as a surprise qualifier at the Turin games, with most expecting 2010 to be her first Olympics. In the season preceding the games, she ranked 11th at the Calgary World Cup, and 3rd at the Canadian championships. Her career highlights including coming in fourth at the 2003 Canadian championships. On February 12, 2011, she was the first non-German athlete to win a World Cup race in ten years.

Gough lives and trains in Calgary, where she attended high school with other top athletes, at the National Sport School.

Discuss this Alex Gough biography with the community: