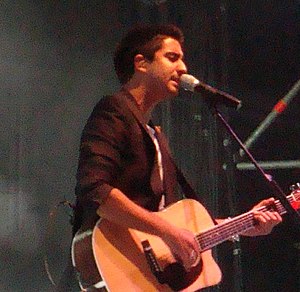 Álex Ubago is a Spanish singer-songwriter. He is especially known for his heartfelt voice and his ballads. He was able to record his debut album "Que Pides Tu" when manager Iñigo Argomaniz that used to go to Alex's cousin's bar heard a demo that Alex made for his girlfriend, his first cd contain songs from this first demo, the songs are "Sabes" and "Hay Que Ver". Alex started to tour national radios with his guitar to sing his songs live and be interviewed. Eventually this strategy worked and his album finally hit the charts. But he reached absolute fame with the publication of the song "Sin Miedo A Nada", featuring Amaia Montero, his biggest hit to date.

Discuss this Álex Ubago biography with the community: