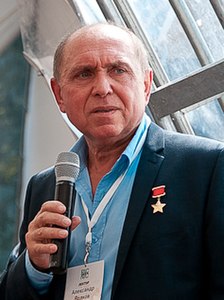 Who is Aleksandr Aleksandrovich Volkov?

Aleksandr Aleksandrovich Volkov is a Soviet cosmonaut of Ukrainian origins.

At the age of 13, Volkov witnessed Yuri Gagarin become the first man in space and this inspired him to become a cosmonaut. He joined the Soviet space programme and became a test pilot before realising his dream.

On board the Mir space station, he controlled the docking procedures among other things.

The Soviet Union broke up in 1991. At the time Volkov was orbiting Earth on Mir with Sergei K. Krikalev, "the last citizens of the USSR". Having gone into orbit as Soviet citizens, they returned to Earth as Russian citizens.

The title of Hero of the Soviet Union;

the title Pilot-Cosmonaut of the USSR;

Order of the October Revolution;

Order of Friendship of Peoples;

Medal 2nd class of the Order of Merit for the Fatherland;

Medal "For Merit in Space Exploration";

Officer of the Legion of Honour;

He worked as Commander of the Cosmonaut Team at the Cosmonauts Training Centre from January 1991 until August 1998. His work was to prepare Russian and foreign cosmonauts for future flights to space stations to Mir and the International Space Station.

Discuss this Aleksandr Aleksandrovich Volkov biography with the community: