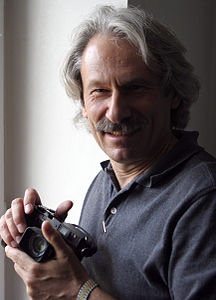 Who is Alexander Zemlianichenko?

He has been working for the Associated Press in Moscow since 1990. He has traveled extensively, covering news stories throughout the former Soviet Union, the Middle East, Europe and the United States.

He was one of five AP photographers who won the 1992 Pulitzer Prize for photos of the Soviet coup attempt of 1991. He also was a finalist in the 1995 Pulitzer competition for his photographs of the war in Chechnya, Russia.

Zemlianichenko received his second Pulitzer Prize in 1997 for a photo of Russian President Boris Yeltsin dancing at a rock concert. The same photo won a World Press Photo award in 1996. He was later invited to be a jury member at World Press Photo.

Discuss this Alexander Zemlianichenko biography with the community: