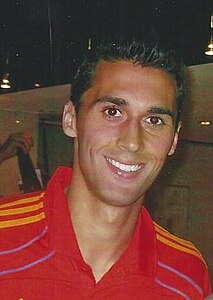 Who is Álvaro Arbeloa?

Álvaro Arbeloa Coca, is a Spanish professional footballer who plays for Real Madrid. He is predominantly a right back, although he can also play on the left side.

Arbeloa started his career with Real Madrid, playing mostly with the reserves. In 2006 he moved to Deportivo de La Coruña, joining Liverpool after half a season and going on to appear in 98 official games over the course of three Premier League seasons. In 2009 he returned to Real Madrid, for a fee of £3,500,000.

Internationally Arbeloa gained 56 caps for Spain, representing the country at the 2010 World Cup, Euro 2008 and Euro 2012, and winning all tournaments.

Discuss this Álvaro Arbeloa biography with the community: