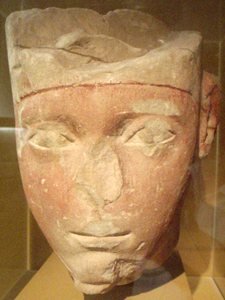 Who was Amenhotep I?

Amenhotep I was the second Pharaoh of the 18th dynasty of Egypt. His reign is generally dated from 1526 to 1506 BC. He was born to Ahmose I and Ahmose-Nefertari, but had at least two elder brothers, Ahmose-ankh and Ahmose Sapair, and was not expected to inherit the throne. However, sometime in the eight years between Ahmose I's 17th regnal year and his death, his heir apparent died and Amenhotep became crown prince. He then acceded to the throne and ruled for about 21 years.

Although his reign is poorly documented, it is possible to piece together a basic history from available evidence. He inherited the kingdom formed by his father's military conquests and maintained dominance over Nubia and the Nile Delta but probably did not attempt to keep power in Syrio-Palestine. He continued to rebuild temples in Upper Egypt and revolutionized mortuary complex design by separating his tomb from his mortuary temple, setting a trend which would persist throughout the New Kingdom. After his death, he was deified into the patron god of Deir el-Medina.

Discuss this Amenhotep I biography with the community: