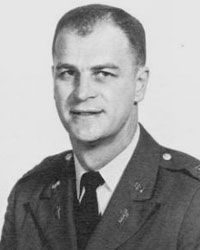 Who is Charles Liteky?

Charles James "Charlie" Liteky, formerly known as Angelo Liteky, is an American peace activist who served as a United States Army chaplain in the Vietnam War and was awarded the U.S. military's highest decoration, the Medal of Honor. A Roman Catholic priest, Liteky received the award for braving intense fire to carry 20 wounded soldiers to safety during a 1967 battle. He later left the priesthood, became a social activist, and in 1986 renounced his Medal of Honor.

Discuss this Charles Liteky biography with the community: