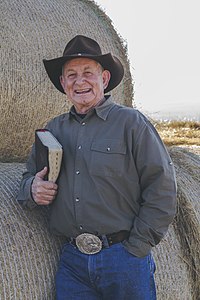 Who is Angus Buchan?

Angus Buchan was originally a Zambian maize and cattle farmer of Scottish descent who started farming in Zambia but was forced to sell everything and move to Greytown, KwaZulu-Natal, South Africa in 1976 due to political unrest in that country.

In 1980 he started the Shalom Ministries to preach in his local community. Over time he has become a full time evangelist while the farm is now being run mostly by both his sons.

In 1998 Angus wrote a book about his life, Faith Like Potatoes, the book was turned into a film of the same title in 2006. Angus Buchan's Ordinary People is a 2012 semi-biographical film that tells the story of the growth of Buchan's ministry from the 1970s to the present, and that of three fictional characters whose lives are changed after attending one of his conferences.

About criticism: "Not one cent goes to Angus. He lives in the same wattle and daub house that he built on his farm. He drives the same old car. He doesn't even have medical aid." said Bruce Winship.

Discuss this Angus Buchan biography with the community: