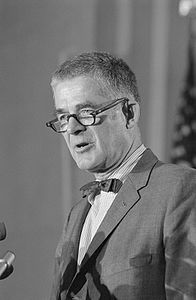 Who was Archibald Cox?

Archibald Cox, Jr. was an American lawyer and law professor who served as U.S. Solicitor General under President John F. Kennedy and later as a special prosecutor during the Watergate scandal. During his career, he was a pioneering expert on labor law and also an authority on constitutional law. The Journal of Legal Studies has identified Cox as one of the most cited legal scholars of the 20th century.

Discuss this Archibald Cox biography with the community: