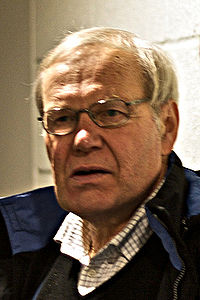 Who is Arne Scheie?

Arne Scheie is a sports commentator, with football and ski jumping as his specialities.

Arne Scheie is a part of the cultural landscape for many Norwegians, who have grown up with his commentary. Among others, he is known for his spontaneous outbursts to his colleague Jon Herwig Carlsen such as when Tommy Ingebrigtsen won world championship gold in ski jumping in Thunder Bay in 1995: "Can I kiss you, Jon?" Carlsen replied "Yes! Of course!" Another famous moment came during the FIFA World Cup 1998 when Norway beat Brazil 2-1 after a penalty from Kjetil Rekdal. Scheie was so excited by the goal that he credited it to "Kjetil Reknett, of Molde and Werder Bremen". Rekdal has never played for Werder Bremen.

Discuss this Arne Scheie biography with the community: