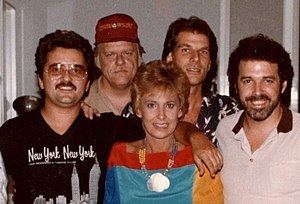 Who was Barry Beckett?

Barry Edward Beckett was a keyboardist who worked as a session musician with several notable artists on their studio albums. He was also a record producer. Along with David Hood and Roger Hawkins, his bandmates in the Muscle Shoals Rhythm Section, Beckett took to the road in 1973 in the expanded lineup of Traffic. Recordings from this tour can be heard on Traffic's live album On The Road.

He was involved in the "Muscle Shoals Sound" as a member of the rhythm section at the Muscle Shoals studio in Sheffield, Alabama, of which he was one of the founders in 1969. The studio produced such hits as "Torn Between Two Lovers" and "Smoke from a Distant Fire". Beckett was co-producing with Jerry Wexler when, in 1979, Bob Dylan called on Wexler to produce the Slow Train Coming sessions. Beckett not only co-produced the album but played piano and organ throughout.

Discuss this Barry Beckett biography with the community: