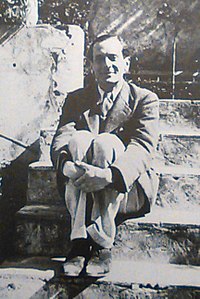 Who was Basil Murray?

Basil Murray was the second son of the scholar Gilbert Murray and his wife Lady Mary Howard, daughter of the 9th Earl of Carlisle.

His sister Rosalind was the first wife of Arnold J. Toynbee. Murray attended the University of Oxford, where he had a somewhat unsavoury reputation, and Evelyn Waugh met him there in 1922. Murray would later provide Waugh with the model and first name for his anti-hero Basil Seal, star of the novels Black Mischief and Put Out More Flags.

Murray became involved in anti-Fascist politics after Hitler's rise to power and in 1936 managed to incite a riot by heckling the British fascist Oswald Mosley during a speech at Oxford University. He was subsequently tried and convicted of breach of the peace in a proceeding described by the philosopher Isaiah Berlin as a disastrous miscarriage of justice.

As a journalist, he covered the Spanish Civil War from the Republican side, making radio broadcasts from Valencia. He died in Spain, purportedly of pneumonia. According to a memoir by journalist Claud Cockburn, however, Murray was bitten to death by his pet ape while lying in a drunken stupor in a Valencia hotel.

He was the father of the writers Ann Paludan and Venetia Murray.

Discuss this Basil Murray biography with the community: