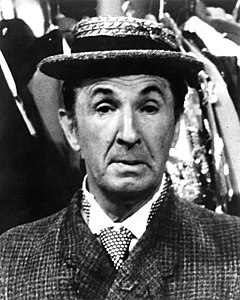 Who was Ben Blue?

Born to a Jewish family in Montreal, Quebec, Blue emigrated to Baltimore, Maryland at the age of nine, where he won a contest for the best impersonation of Charlie Chaplin. At the age of fifteen he was in a touring company and later became a stage manager and assistant general manager. He became a dance instructor and nightclub proprietor. In the 1920s Blue joined a popular orchestra, Jack White and His Montrealers. The entire band emphasized comedy, and would continually interact with the joke-cracking maestro. Blue, the drummer, would sometimes deliver corny jokes while wearing a ridiculously false beard. The band emigrated to the United States, and appeared in two early sound musicals: the Vitaphone short subject Jack White and His Montrealers and Universal's feature-length 2-strip Technicolor revue King of Jazz. In 1930, Blue toured with the "Earl Carroll Vanities".

Blue left the band to establish himself as a solo comedian, portraying a bald-headed dumb-bell with a goofy expression. Producer Hal Roach featured him in his "Taxi Boys" comedy shorts, but Blue's dopey character was an acquired taste and he was soon replaced by other comedians. Later in the 1930s he worked at Paramount Pictures, notably in The Big Broadcast of 1938, and later at Metro-Goldwyn-Mayer, in films such as Easy to Wed. In 1950, he had his own short-lived TV series, The Ben Blue Show, and was also a regular on The Frank Sinatra Show.

Discuss this Ben Blue biography with the community: