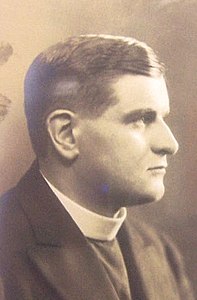 Who was Benjamin Pollard?

Pollard and educated at Manchester Grammar School and the Victoria University of Manchester. He was ordained in 1914 and was a chaplain during World War I with the British Armed Forces. After this he became the Precentor of Sheffield Cathedral and then Rector of Bradfield. From 1924 to 1928 he was Rector of St Chrysostom's Victoria Park, Manchester and then began a long association with the Lancaster area. He was Vicar for eight years and, in his last years there, an archdeacon before his ordination to the episcopate as the first Bishop of Lancaster. He was translated to be the Bishop of Sodor and Man in 1954. He retired in 1966 and died the following year.

Discuss this Benjamin Pollard biography with the community: