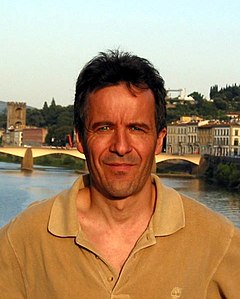 Who is Bernard Chazelle?

Bernard Chazelle is the Eugene Higgins Professor of Computer Science at Princeton University. Much of his work is in computational geometry, where he has found many of the best-known algorithms, such as linear-time triangulation of a simple polygon, as well as many useful complexity results, such as lower bound techniques based on discrepancy theory. He is also known for his invention of the soft heap data structure and the most asymptotically efficient known algorithm for finding minimum spanning trees.

Chazelle originally grew up in Paris, France, where he received his bachelors degree and masters degree in applied mathematics at the Ecole des Mines de Paris in 1977. Then, at the age of 22, he came to Yale University in the United States, where he received his Ph.D. in computer science under the supervision of David P. Dobkin. He went on to claim important research positions at institutions such as Carnegie Mellon, Brown, NEC, Xerox PARC, and the Paris institutions École Normale Supérieure, École Polytechnique, and INRIA. As of June 2013, he has 235 published articles, 120 of which are journal articles, and published two books.

Discuss this Bernard Chazelle biography with the community: