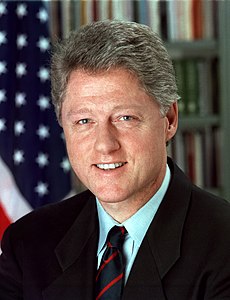 Who is Bill Clinton?

William Jefferson "Bill" Clinton is an American politician who served as the 42nd President of the United States from 1993 to 2001. Inaugurated at age 46, he was the third-youngest president. He took office at the end of the Cold War, and was the first president of the baby boomer generation. Clinton has been described as a New Democrat. Many of his policies have been attributed to a centrist Third Way philosophy of governance. Before becoming president he was the Governor of Arkansas serving two non-consecutive stints from 1979 to 1981 and from 1983 to 1992 and was also the state's Attorney General from 1977 to 1979.

Born and raised in Arkansas, Clinton became both a student leader and a skilled musician. He is an alumnus of Georgetown University, where he was a member of Phi Beta Kappa and Kappa Kappa Psi and earned a Rhodes Scholarship to attend the University of Oxford. He is married to Hillary Rodham Clinton, who served as United States Secretary of State from 2009 to 2013 and who was a Senator from New York from 2001 to 2009. Both Clintons received law degrees from Yale Law School, where they met and began dating. As Governor of Arkansas, Clinton overhauled the state's education system, and served as Chair of the National Governors Association.

Discuss this Bill Clinton biography with the community: