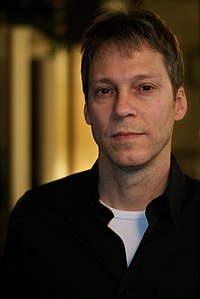 Who is Brian Lindstrom?

Lindstrom made Finding Normal in 2007, a cinema-verite documentary following three long-term addicts trying to rebuild their lives with the help of peer counselors. Lindstrom made the film in 2007 on a budget of $5,000, shooting and editing himself. Finding Normal won awards at the Astoria International and Longbaugh Film Festivals, and was broadcast on Oregon Public Broadcasting. Finding Normal is the only film ever to be shown to inmates in solitary confinement at Oregon State Penitentiary.

Other films directed by Lindstrom include the documentaries Kicking, To Pay My Way With Stories, and Writing Myself. His award-winning narrative short, Lucy's Room, is adapted from the short story "Surprised by Joy," by Charles Baxter. He was awarded a Telly for work on The Visionaries, a PBS documentary series hosted by Sam Waterston.

Discuss this Brian Lindstrom biography with the community: