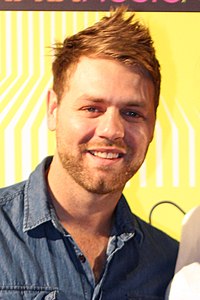 Who is Brian McFadden?

Brian Nicholas McFadden is an Irish singer-songwriter who rose to fame in the late 1990s as a member of the Irish boyband Westlife. He was a judge on Australia's Got Talent.

Following his departure from Westlife, McFadden released his debut solo album, Irish Son, which peaked within the top 5 on both the Danish and Irish Albums Charts, and produced his first two No. 1 solo singles "Real to Me" in four European countries and also "Almost Here", a duet with his now ex-fiancée Delta Goodrem which gained a platinum accreditation in Australia. "Like Only a Woman Can", the lead single from his second album, Set in Stone, became his third No. 1 single as a solo artist. In 2010, McFadden scored his fourth No. 1 with the hit single "Just Say So", featuring American rapper Kevin Rudolf, and gained his second Australian platinum accreditation. The single received a nomination at the 2010 ARIA Music Awards for Most Popular Australian Single.

Discuss this Brian McFadden biography with the community: