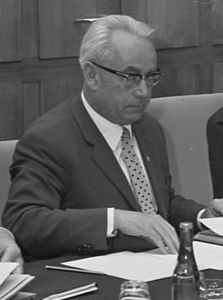 Who was Bruno Heck?

Bruno Heck was a German politician of the Christian Democratic Union.

Heck was born into a poor Swabian catholic family. He studied philosophy and theology at the University of Tübingen. From 1957 to 1976 Heck was a member of the German Bundestag.

Heck was Minister of Family Affairs and Youth from 1962 to 1968. After the resignation of the FDP ministers in 1966, he additionally headed the Ministry of Housing and Urban Development for a short time.

Discuss this Bruno Heck biography with the community: