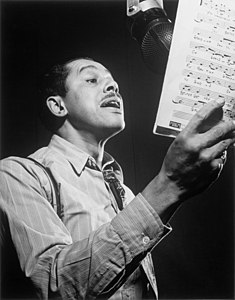 Who was Cab Calloway?

Cabell "Cab" Calloway III was an African-American jazz singer and bandleader. He was strongly associated with the Cotton Club in Harlem, New York City, where he was a regular performer.

Calloway was a master of energetic scat singing and led one of the United States' most popular African-American big bands from the start of the 1930s through to the late 1940s. Calloway's band featured performers including trumpeters Dizzy Gillespie and Adolphus "Doc" Cheatham, saxophonists Ben Webster and Leon "Chu" Berry, New Orleans guitar ace Danny Barker, and bassist Milt Hinton. Calloway continued to perform until his death in 1994 at the age of 86.

Discuss this Cab Calloway biography with the community: